Rydel Mary Lynch (born August 9, 1993) is 26 years old. She is an American singer, part of the band R5 with her brothers Riker Lynch, Rocky Lynch, and Ross Lynch, along with their best friend Ellington Ratliff.

Rydel is a unique blend of beauty, sass and tomboy. She loves tutus, and has her own gorgeous type of style. She has many adoring fans as well as her brothers. People say she is the special member out of the group, and family. She is their secret weapon. This is because she is the only girl in the band. She loves to sing, and is the keyboard player in the band.  Her innocence and sweet heart are her trademarks, but she is also an amazing dancer and actor. She has never had a boyfriend until she began dating band-mate, Ellington Ratliff. 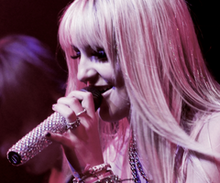 She can be seen dancing with her brother Riker in the DVD movie "Sunday School Musical" and on several commercials and dance DVDs, including a recent Sears commercial featuring Vanessa Hudgens and as the lead in a new Bollywood Dance video. She could also be seen in the show "So You Think You Can Dance" with Rocky.

Rydel plays keyboards, tambourine and sings with R5. Rydel was also on the cover of Girls Life magazine.

Rydel is an elligant dancer, and she also teaches it. She has been seen dancing The Rage/Show me how you burlesque. On the only youtube video of this, particular comments say she added so much sass and fierce into the dance, she even did better than Julianne Hough did in the actual movie. She had also choreographed a dance for LA Hip kids. Sources say she has taught well and knows great moves.

For the first time, R5 had Rydel singing a cover of "Call Me Maybe" originally by Carly Rae Jepsen. By far, it was amazing, and she even got the crowd to sing along. She used to sing a cover of "Pour Some Sugar On Me" by Def Leppard. She also sang "Shut Up And Let Me Go" by The Ting Tings and "3" by Britney Spears.

Beyond R5, Rydel has been pursuing a YouTube channel with over 100,000 subscribers. Check it out here!

She also has an online boutique where she designs and sells clothes, accessories and more! https://shoprydel.com/

Retrieved from "https://r5rocks.fandom.com/wiki/Rydel_Lynch?oldid=18938"
Community content is available under CC-BY-SA unless otherwise noted.